April is Testicular Cancer Awareness Month. In the United States, around 9,000 men will become diagnosed with this specific cancer disease type (source).

Our team wanted to interview Dave Fuehrer and Kenny Kane, two co-founders of GRYT Health, to get their testicular cancer experiences and perspectives. Kenny is also chief executive officer of the Testicular Cancer Foundation.

You can watch the interview below:

Interview notes are below:

Kenny Kane’s father was diagnosed with testicular cancer (stage 2b Embryonal Carcinoma) when he was 17, about a month before his high school graduation. When his peers were getting excited about moving on with life, such as exploring collegiate options and otherwise, he was thrust into a life of caregiving for his father.

Supporting his father, Kenny did a lot of physical support in taking him to appointments. One of the most stressful times for him was after an orchiectomy procedure, where he felt a window of time quickly closing after the procedure with the possibility of some cancer cells still within his body. His internal dialogue consisted of questions such as, “How quickly was it spreading?” and “How long was his cancer there for?“

Dave tried to avoid mental health issues he was experiencing during his testicular cancer diagnosis. He was 25 when he was diagnosed the first time, 30 when diagnosed a second time, and it took him to the age of 35 when he felt comfortable talking about his experience and the feelings he had. Now, he thinks that we all need to allow each other some grace and that we all move at different speeds when handling emotions.

Negative affect of testicular cancer in their lives

Cancer stole Dave’s confidence and sense of who he was when he was going through it. He was pretending to be who he was before cancer. But inside, he didn’t feel that way. The more that pain grew, the more he thought he had to hide it.

Kenny’s father’s diagnosis likely resulted in his personal loss of innocence. Any time a loved one is in a compromised state, it puts things into perspective. While not necessarily a negative, it does give immediacy to the need to “step up” and be that reliable figure for someone. The isolation of a caregiver is that while you may not be going through what the individual you’re helping is going through, you’re still feeling the effect in your life, whereas your peers aren’t.

How their experiences pivoted their lives in a positive way

Kenny started gathering experience around pharmacy technician career. He quickly grew into a background role at the pharmacy he was at. Doing so allowed him to gain perspective and empathy for those going through acute or chronic health events. It helped form his lens on what empathy was and should be. He then started working at Stupid Cancer. The journey for him has been using skills directed towards any job or lifestyle and applying them to help others. His experience being a testicular caregiver is the guiding force that he can trace back to that beginning.

Stupid Cancer was the start of how Dave learned that he didn’t do anything wrong – what his cancer diagnosis made him feel – to being able to speak about it with others.

How did the diagnosis come about

Dave remembers going into the health services department at RIT and letting them know he felt like he pulled a muscle. However, his brother remembers a different story: how he and his friend were telling him for months to get things checked out. The second diagnosis, he knew for months things weren’t feeling normal. His annual checkup came about, and he’s thankful to have gone and got things checked out on that routine basis.

Kenny’s father worked in the healthcare industry. His diagnosis came only by a freak accident that happened and having his colleague check out that injury. Forty-eight hours later, he was getting an orchiectomy.

Things they want others to know

Testicular cancer is seen as a highly beatable cancer at stage 1. The advice given is to do the self-check exam. Justin at A Ballsy Sense of Tumor has an excellent resource to learn how. If a friend or family member acts differently or feels like something is wrong with their body, push for them to seek help and see a doctor. The sooner you can respond to changes to your body, the better. Never think of asking for help as being burdensome or being an issue – you will never come across as weak or needy by asking for help. 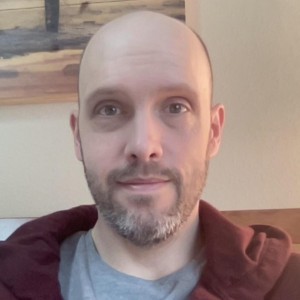 Christian is Vice President, Digital Strategy at Gryt. He is a Hodgkin Lymphoma survivor who lives with his family in Washington state in the woods with night sky twinkling stars. He enjoys watching and playing (poorly) hockey, Magic: The Gathering, and playing tennis.
PrevPreviousDavid Reed’s Story
NextYou’re Still Here!Next